As both further and higher education come under unprecedented financial pressures the impact on hospitality programmes in the UK is alarming. Professor Peter Jones FIH has researched and reports on the worrying trends

Imagine your business in 10 years time; the cacophony and paralysis of Brexit is in the past (Possibly, Probably, Unlikely, – delete as appropriate), you are continuing to try to grow your business but the skilled staff shortages are ever present.

In a quiet moment you reflect that you no longer seem to be getting job applications for entry or graduate positions from students and ask, “where have all the students gone? What’s happened to hospitality education in the UK?”

The local FE colleges catering and hospitality departments have closed, the well-known and reputable universities that you have worked with in the past have long since ceased to offer hospitality education, you find it impossible to navigate the complexity of the apprenticeship systems and the very few school leavers applying for posts with the new catering T level award, think they’re qualified to be your new Chef de Partie.

Is this scenario Possibly, Probably or Unlikely?

Reading the runes suggests that ‘Probably’ is the most likely scenario. The current evidence reinforces that view. There are real threats to the future of hospitality education in the UK.

This is more than the anecdotal. According to the available Government data tables FE enrolments on all regulated hospitality and catering qualifications has reduced by 35% over the last two years. Between the academic years 2016/17 to 2017/18 there has been a decline of 50,940 enrolments in all qualifications from entry level to level 4 as the illustration on page 15 shows.

As with all data it should be treated with caution. The data indicates the number of enrolments onto regulated qualifications, not the number of students. The actual number of students and therefore entrants to the industry will be a smaller number as some of those students will be enrolled on more than one award. For example the data includes students enrolled on Level 2 Awards in Food Safety (16,508 in 2016/17, 15,330 in 2017/18) who may well be enrolled on other qualifications.

This reduction in enrolments is particularly marked at level 2, from 97,460 in 2016/17 to 59,600 in 2017/18. This is shown clearly in the illustration. When compared by types of award, the reduction in chefs related enrolments is down from some 40,000 to just over 24,000. With this rapid decline in enrolments, FE Colleges, who are under enormous funding pressures, will be looking to cut costs and where necessary cut courses. Catering & Hospitality Departments are more expensive to run than classroom based courses and if minimum numbers fall below break even it is inevitable that they will close.

This is probably in part due to changes in the apprenticeship system and the introduction of the apprentice levy on the 4th April 2017. The most significant fall appears to have occurred post the announcement of the levy in the 2015 budget. The changes to apprenticeships and the funding systems have also produced a number of consequences that have certainly changed the industry perception of what an ‘apprentice’ is, particularly in levy paying companies.

The much praised and understood apprenticeships for 16-19 year olds as an entry to the profession has almost disappeared. In 2017/18 there were less than 700 under 19 year olds starting as apprentice chefs. An analysis of the age profile of hospitality and catering apprentices across the range of apprenticeship pathways indicates that less than 22% are under 19, whilst almost 45% are over 25. Anecdotal evidence suggests that some large companies, paying the apprentice levy, are recouping that payment through putting current employees and more senior staff on intermediate and advanced level apprenticeships. This could be seen as a form of professional development but is rather counter to the traditional view of what is an ‘apprentice’. Whilst they may be classified as ‘apprentices’ they are not new entrants to the industry. It may help retention but not recruitment of new staff.

The decline in Hospitality in Higher Education

In 2014 there were 142 hospitality related courses being offered in 64 institutions, that has now reduced to 127 courses although the number of institutions remains at 64. The number of institutions however masks some significant changes in the types of institutions offering hospitality courses. Some universities, for example Glasgow Caledonian University, Oxford Brookes and Bournemouth have signalled that they are withdrawing from hospitality, whilst an increased number of London based private colleges (12) are now offering Higher National Diploma programmes that target international students. There has been a clear reduction in the number of courses where hospitality is offered as the primary or single subject, as well as a reduction in courses where hospitality is offered in combination with other subjects. Both suggest that the role of hospitality as a major subject area within higher education institutions is on the decline and the past higher education champions of the industry are disappearing.

The Introduction of T Levels

T levels are being introduced in 2020/21 as an alternative technical route to A-levels. These new awards will offer a binary choice for 16 to 18-year-olds. Either an A-level route or a T level route. The Government Consultation Paper, Review of Post 16 Qualifications, states that these are being designed as, “prestigious technical alternatives to A-levels, aligned with work-based technical education delivered at level 3 through apprenticeships”. It goes on to state; “T levels are the centrepiece of our (government) plans; rigorous, stretching programs of study at level 3 based on recognised employer led standards”.

But not for the hospitality industry. The T levels qualifications are being designed as the equivalent to 3 A-levels. The content is to be based at level 3 on the relevant apprentice standard, to ensure comparability between the work based and academic route. For hospitality the approved level 3 apprentice standard is Hospitality Supervisor. The very title implies a level of seniority within the industry and the entry criteria suggest “…it is expected that the individual would have worked within an operational role within the industry to start on this apprenticeship standard”.

However the Department for Education (DfE) have taken the view that the hospitality apprentice standard on which the T level would be based has insufficient content to be developed as a T level qualification. Therefore the hospitality route will only be available as an apprenticeship. This decision poses some fairly fundamental questions.

What is the rationale for developing a 16- 19 qualification based on an occupational standard that applies to a specialist industry role that requires operational industry experience?

By determining the content of T levels from apprentice standards, that content must be narrowly drawn, based as it is on a specific job role. This prevents a much wider curriculum content such as would be found in the widely recognised current range of level 3 certificate and diploma programmes. It also prevents combining the breadth of both catering and hospitality subjects from which students have traditionally made progression and career choices.

Secondly what 16-year-old would have sufficient operational experience to undertake this standard as an apprenticeship? 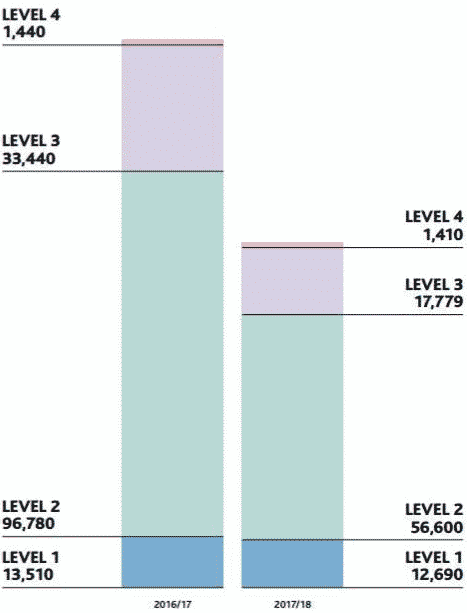 Thirdly with parental, schools and colleges pressure on 16-year-olds to remain in mainstream education will this be a realistic option?

No. The evidence of this is very clear, for the academic year 2017/18 there were only 46 under 19 apprentice starts for the hospitality apprenticeship standard. As the data is only collected for under 19-year-olds, it cannot be determined how many of the 46 may have completed 16 to 18 education before embarking on the apprenticeship.

The ‘good news’ is that there will be a T level in Catering but will be based on the Level 3 apprenticeship standards of Chef de Partie and a Senior Production Chef. Comments such as ‘crazy’ come to mind as it is difficult to understand how 16 to 18-year- olds would be able to undertake a T level with content that is based on complex roles that require a strong professional skills foundation and relevant experience.

All of this suggests a narrowing of choice for students and a lack of progression and career opportunities. It is not just the lack of a T level of hospitality route, further reductions in choice and progression are an inevitable outcome of the current qualifications review.

The object of the review is, ”to streamline qualifications for post 16, ensuring that we (government) only fund those that are high-quality, have a distinct purpose, are truly necessary and support progression to successful outcomes”. The implications are clear, a reduction in choice for the potential student. Level 3 courses that are likely to be considered in the review include; Certificate in Hospitality and Catering Principles (Professional Cookery), Diploma in Advanced Professional Cookery, Diploma in Food and Beverage Service Supervision, Diploma in Hospitality Supervision and Leadership, and the Diploma in Hospitality.

Post 16 Options for Progression to a Catering and Hospitality Career 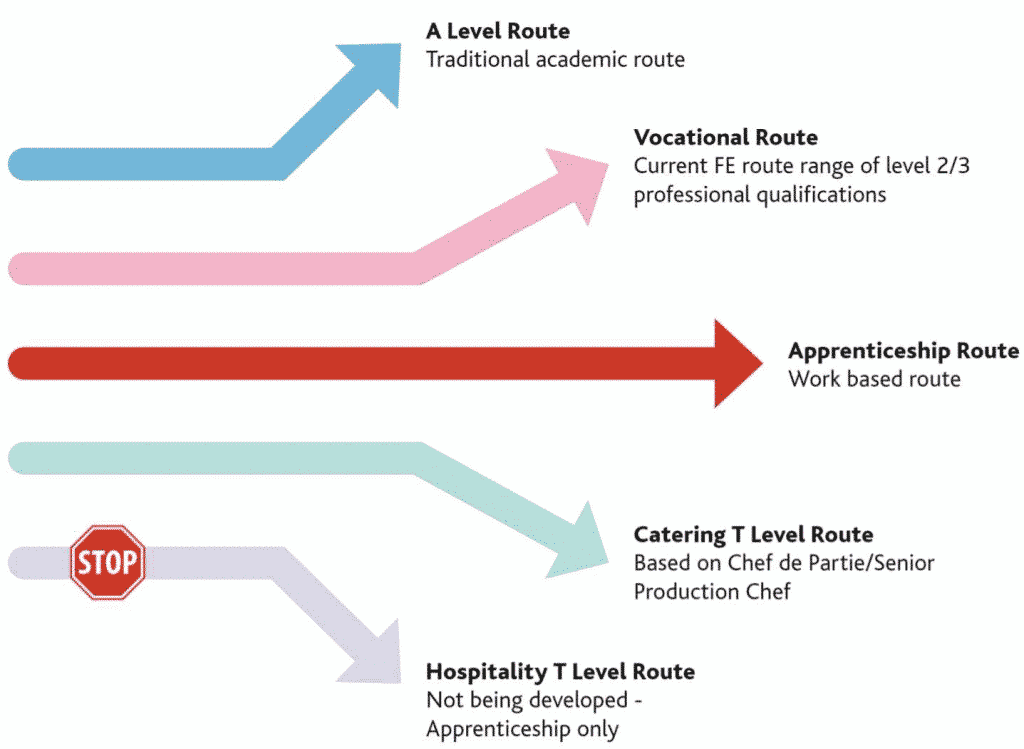 These are all well respected and recognised qualifications but will they still be available in 10 years time?

The professional cookery options must be considered under threat given the catering T level developments. The hospitality options are similarly threatened, not by the non- existent hospitality T level, but by the decline in FE student enrolments and the intention to remove existing qualifications in order to fund T levels. The potential catering students will at least have some sort of choice but not so the potential hospitality students. No T level option and probably a reduced choice or no choice of suitable alternative qualifications. For those wishing to progress to a hospitality route in higher education the choice is becoming very limited as illustration 3 shows.

Probably – the most likely scenario

It is difficult to see another outcome based on the current evidence. Hospitality education and training is in rapid decline and the new developments are further exacerbating an already very difficult situation. Where does the solution lie? With the government? They certainly are a major player in this but despite warm words, our employment record and the major contribution the industry makes, financially, socially, and culturally we are not being actively listened too.

At a recent meeting with the DfE it was clear they will only respond to what they refer to, as ‘evidence’. The industry must now respond and react, we must collect the evidence and use that evidence to put pressure on local MP’s, colleges and universities to raise our concerns as well as taking our concerns to central government. We must have positive proposals for improving hospitality education and training. We must ensure that our voice is heard and we are not marginalised and left behind again. 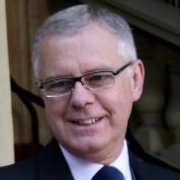 Chair of the Professional Review Panel

Chair of the Institute of Hospitality professional review panel, Peter has held a number of senior academic appointments at Bournemouth University and the University of West London, as well as being the project director for the development of the Edge Hotel School.